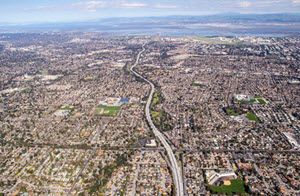 Voters in five small and midsize cities in the Bay Area are set to decide Nov. 8 on whether to enact various forms of rent regulation that would keep rent increases for existing tenants pegged near the rate of inflation.

Tenant organizations, unions and church groups are knocking on thousands of doors in an effort to drum up support for measures designed to protect apartment dwellers from runaway rents.

On the other side, landlords and real-state agents are pouring money into mailers and television ads in a vigorous effort to battle the initiatives.

“We’re taking it very seriously,” said Thomas Bannon, chief executive of the California Apartment Association, a landlords group. “We are engaged in some pretty aggressive campaigning to get the word out as to why rent control is not the answer.”

In all, the proposals’ opponents have raised more than $1.8 million against the measures in the five cities, according to campaign finance records, largely from groups like the National Association of Realtors and an array of landlords including apartment giant Equity Residential. That far outstrips the roughly $200,000 reported raised by various groups supporting rent control.