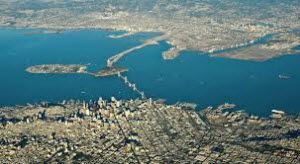 The Bay Area job market is so robust that this region has reached what is considered “full employment,” and California should reach that mark sometime in the second half of 2016, according to an economist with the UCLA Anderson Forecast, which released a new quarterly report Monday.

Shrinking jobless rates and steadily expanding employment gains, along with a surging economy, are primarily what is boosting the employment picture for the nine-county Bay Area, said Jerry Nickelsburg, senior economist with the UCLA Anderson Forecast.

Each of the Bay Area’s metro regions have recovered all the jobs they lost in the Great Recession, and some even have set all-time records for employment or are near those peaks.

“The job market in the Bay Area is outstanding,” said Scott Anderson, chief economist with San Francisco-based Bank of the West. “The Bay Area employment market is growing much faster than the nation or the state. It’s attracting people to the region.”

The tech boom is helping to drive the economy in the Bay Area.

“The main driver is the growth of the technology sector in Silicon Valley,” Anderson said. “But this rebound is broader than tech. Health care, leisure and hospitality, retail, construction and even manufacturing are growing.”