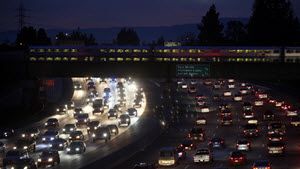 OAKLAND — Over the past decade or more, the Bay Area’s boundaries have been bleeding into surrounding counties as skyrocketing housing prices push residents farther from jobs centered in Silicon Valley and San Francisco.

Those residents are still employed in the Bay Area though, leading to longer commutes and mounting pressure on the region’s roads and rails. While that trend has been ongoing for some time, the problems resulting from it have become particularly acute, according to a new report released Thursday by the Bay Area Council, a business-sponsored public policy advocate.

“All these people are moving around on the most congested corridors,” said Jeff Bellisario, the research manager for the Bay Area Council Economic Institute, “and there’s no great transit options for these commuters.”

Approximately 602,000 vehicles enter and exit the nine-county Bay Area from other parts of what the council has dubbed the “Northern California Megaregion,” an area comprising six counties in and around Sacramento, three Northern San Joaquin Valley area counties, and three Monterey Bay area counties.

The Northern San Joaquin Valley area is leading the region in the number of workers it is sending to Bay Area companies. Between 1990 and 2013, the number of people commuting from the valley to job centers in the Bay Area more than doubled, growing around 32,000 commuters to nearly 65,000, according to the report.