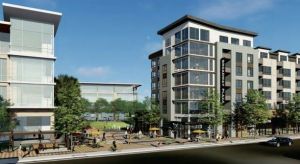 A massive development project featuring housing, office buildings and retail space is expected to soon transform an underutilized strip mall into the cornerstone of a new, vibrant district in Redwood City. The Redwood City Council voted unanimously Monday night to give the Broadway Plaza project its final stamp of approval from the city.

Council members thanked the developer, the Sobrato Organization, for working so closely with members of the community and touted the project as one other developers should aspire to.

Council member Alicia Aguirre called it “an amazing project,” adding that the developer went “above and beyond” its requirement to the community.

“We’ve always said when there’s a good development it’s because it’s taken time for the developers to really reach out to the community,” Aguirre said during Monday’s meeting. “…I fully support something like this in our community. It’ll be amazing to serve so many (people) at so many different levels.”