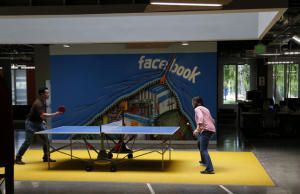 MENLO PARK — By the end of 2019, more than 15,000 people could be working at Facebook’s headquarters and two nearby campuses in Menlo Park.

That’s not counting a couple of other planned campuses — the 21-building Menlo Science & Technology Park that Facebook purchased in 2015 and three buildings on Jefferson Drive it leased from Intuit earlier this year.

Facebook released a draft environmental impact report May 26 detailing its plan to redevelop the 58-acre TE Connectivity site between its West Campus along Bayfront Expressway and Chilco Street. That plan, which is out for public comment until July 11 and can be viewed in full at http://bit.ly/FaceDEIR, calls for an additional 6,400 employees to occupy two new 75-foot-tall buildings, as well as a 75-foot-tall, 200-room hotel that would be staffed with 150 workers. Combined, the three structures would encompass 1.14 million square feet of space, a 121,3000-square-foot increase over the site’s previous footprint. The site would contain 3,533 parking spaces on surface lots beneath the buildings.

The new buildings, according to city documents, would be similar in “architectural style, height, and massing” to the Frank Gehry-designed building with 2,800 employees that opened last year just east of the project site, as well as a building just south of the project site where Chilco curves adjacent to a rail line that is currently being occupied by 1,540 eventual workers.