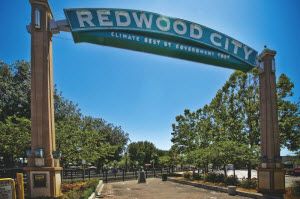 Redwood City is “Deadwood City” no more. The Peninsula town has shed its old nickname with a downtown renaissance marked by enhanced public areas, more entertainment and shops—and now, a large boost in multifamily housing construction.

The city’s apartment development pipeline is brimming with 2,400 units proposed or under construction, said Dan Zack, the city’s downtown development coordinator.
“Redwood City is on fire,” said Brett Weber, a senior vice president in the local office of real estate services firm Colliers International. There are about 10 construction projects underway in or near the city’s downtown district alone, he said, including multifamily developments, a 300,000-square-foot office building and a rebuilding of Kaiser hospital.

Investors’ confidence in the city is shown in part by the lofty $83 million price paid this month by New York-based pension fund TIAA-CREF for the new 132-unit Township luxury apartment complex at 333 Main St. The apartment property—the first built in the city in more than a decade—is about 75 percent leased after just five months of opening, said Drew Hudacek, chief investment officer at San Mateo-based Sares Regis of Northern California, which owned the LEED-Gold certified property with joint venture partner J.P. Morgan Asset Management. Sares Regis will continue to manage the property.

“It set a very high watermark for pricing. Probably the highest in that submarket to date,” said Stan Jones, executive vice president of Marcus & Millichap’s Institutional Property Advisors division in Palo Alto, who worked with Sares Regis on the sale along with IPA’s Phil and Sal Saglimbeni.

Weber said the Township sale shows that there are “people looking to place capital and invest in good-quality real estate on the Peninsula. If you have an infill project that is justifying the rents that people are paying, investors want to be there.”

“Five or 10 years ago, the market was really leery about new housing in central Redwood City. They just weren’t sure there was going to be a demand for it,” Zack said. “I think we’ve really turned that market perception around and now developers are confident that people want to live here.”

Redwood City’s location always gave it potential as a desirable spot to live. It is between San Francisco and San Jose, boasts a Caltrain stop with express service and offers easy access to airports, freeways and bridges. Further, the town’s weather “is about as good as it gets,” Zack said.

The shift from a sleepy bedroom community to a vibrant place to live and visit began in the late ’90s when city planners committed to a downtown revitalization initiative. Since then, a 20-screen movie theater opened, and the city renovated the courthouse square, creating a central place to host town events.

In 2011, Redwood City adopted the Downtown Precise Plan, which outlines “clear and concise rules for future development,” according to the city’s Web site. There are now 1,239 apartments under construction in the downtown core, roughly bounded by Brewster Avenue, El Camino Real, Maple Street and Veterans Boulevard.

Developers credit the city’s leadership and its rapid approval process with the town’s resurgence.

“Redwood City [planners] deserve a lot of credit for what’s going on there now,” Hudacek said. “The energy in the city has changed completely in the past few decades.”

“We were encouraged by the leadership of the city council,” added Peter Schellinger, vice president of development at San Francisco-based Lennar Multifamily Communities. Lennar is developing a 196-unit mixed-use project downtown at 601 Main St., which is slated to open in fall 2015.

Schellinger also noted that the entitlement process took just six months, which is about half the time it typically takes in the Bay Area.

“Having some assurances that you’re going to be able to get entitlements in the foreseeable future is really compelling,” he said.

Additionally, the location fit well in Lennar’s portfolio. “We like transit-oriented development. We like being near job centers. Redwood City offered both of those,” Schellinger said.

Other multifamily projects underway in Redwood City include 141 units at the former Mel’s Bowl, 2580 El Camino Real by SummerHill Apartment Communities; 471 units at 525 Middlefield Road by The Pauls Corp.; and 116 apartments at 201 Marshall St. by Raintree Partners.

All this building and downtown revitalization bodes well for Redwood City’s future.

“With the residential coming in, that downtown core will be able to have people walking on the streets,” Weber said, “It’s going to be a buzz downtown versus a ghost town.”