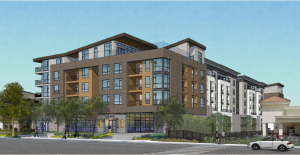 More housing is in the works for Redwood City as Sares Regis Group of Northern California is proposing to build a 90-unit development at 849 Veterans Blvd.

San Mateo-based Sares Regis recently submitted initial plans to the city for an approximately 65-foot tall building with four stories of rental apartments above two levels of parking. The one-, two- and three-bedroom apartments would include seven affordable units, said Lindy Chan, a senior planner for Redwood City.
Also outlined in the multifamily project is about 5,000 square feet of ground-floor amenity space that would include a fitness center and leasing office.

Redwood City is in the midst of a housing boom, with about 2,000 residential units listed as proposed, approved or under construction on the city’s Web site. “You can see there are a lot of projects popping up all around the city—focused more in the downtown area—but there have been a few projects in other corridors as well,” Chan said.

The Sares Regis project would sit on about one acre in the city’s Veterans Boulevard mixed-use corridor near the Township luxury apartments at 333 Main Street. Sares Regis built that 132-unit development and then sold it to New York pension fund TIAA-CREF for $83 million last year—one of the highest prices paid for an apartment complex in that submarket. A 264-unit multifamily project also recently opened nearby at 640 Veterans Blvd., Chan said.

Redwood City’s planning department requested more information from Sares Regis before moving its latest proposal forward, and there is not yet a timeline for the development, Chan said. Sares Regis was not immediately available for comment.