Silicon Valley’s increasingly expensive costs of living are still outweighed by its high average tech salaries and concentration of jobs in Science, Technology, Engineering and Math (STEM), according to a new analysis.

Silicon Valley’s abnormally high pay for tech talent, paired with the region’s wealth of jobs, still outweighs recent labor controversies and rapidly rising costs of living when compared to budding technology hubs like Seattle, Washington D.C. and Austin, according to a new analysis of federal data.

The region received high marks for its $111,745 average annual wage for STEM jobs, which far outpaced even San Francisco’s mean $101,280 as of 2013, according to Bureau of Labor Statistics salary data analyzed for the report.

Overall, the top 10 hubs on the list, in order, were: San Jose, Seattle, Washington D.C., Houston, San Francisco, Austin, Boston, Raleigh, Denver and Dayton, Ohio. See the chart at the bottom of this story for a full breakdown of how the cities stack up when it comes to pay, STEM jobs and costs of living.

On top of the higher STEM earning potential in Silicon Valley, the region also received good marks for the breadth of its tech industry. About 17.3 percent of jobs in Silicon Valley were in STEM fields as of last year. Seattle had the second-largest share of tech jobs with 12.7 percent. 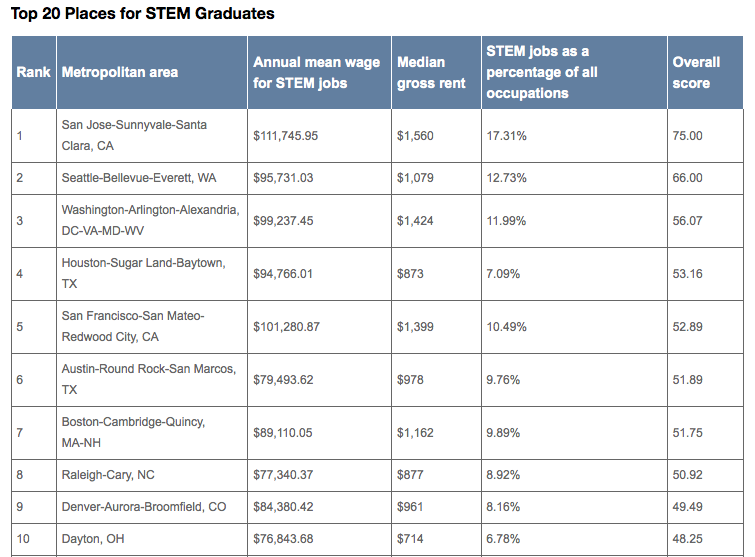