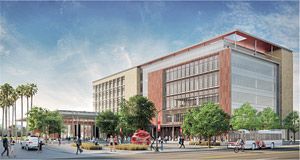 Stanford’s vision to create a new office campus in Redwood City is starting to become a reality as the university has submitted design plans for approval.

It’s been nearly 10 years since Stanford purchased the former Mid-Point Technology Park on Broadway south of Woodside Road as it strategized for future growth.

The 1.5-million-square-foot campus will sit on 35 acres and represents the university’s first significant campus expansion beyond the main Palo Alto campus.

The expansion will be a game changer for Redwood City, said Mayor John Seybert.

“Stanford has such a solid reputation and to have it home-based in this community will have so many positive ripple effects,” Seybert said.

This month, the design will go before the Architectural Advisory Committee for a first look followed by a Planning Commission review scheduled in September.

Stanford wants to house much of its administration in 13 new buildings that will be built in phases.

If approved, groundbreaking for phase one of the project should take place this fall.