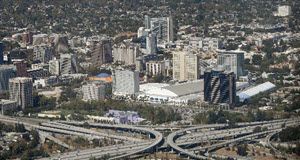 SAN JOSE — The economy and job market in Silicon Valley chalked up an “astounding” year in 2015, but the region’s boom cooled in the final three months as the stock markets weakened, according to a new Silicon Valley Index report released Wednesday.

“Silicon Valley in 2015 had an amazing year,” said Russell Hancock, chief executive of Joint Venture Silicon Valley, a partnership of business, academic and political leaders that analyzes the Silicon Valley economy and advocates for improvements in the region, which released the report. “We are seeing record-breaking numbers despite the fourth-quarter slowdown. The growth is astounding.”

The job growth rate in Silicon Valley was 4.3 percent in 2015, the highest level since 2000, the final year of the dot-com bubble that burst in 2001. Silicon Valley in the report is defined as Santa Clara County, San Mateo County, the Fremont-Newark-Union City area and the Scotts Valley area near Santa Cruz.

“Silicon Valley and the Bay Area have recovered all the jobs they had lost during the Great Recession,” said Rachel Massaro, senior researcher with Joint Venture Silicon Valley.

However, this year’s report arrived with some hazards in tow. The 2016 Silicon Valley Index warned of a shrinking middle class, fewer jobs available at mid-level wages, rising housing costs and worsening transportation. These problems, the study warned, could imperil the boom.