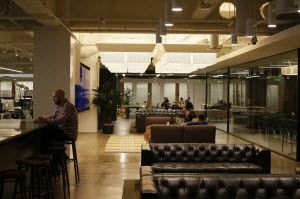 Fierce demand for tech workers and office space in the Bay Area continues to push wages and rents into the stratosphere.

In San Francisco, the average annual wage for tech company workers rose to $176,275 in 2014, up 12.8 percent from the year before. That was the biggest increase among 36 markets nationwide, according to JLL, a commercial real estate services firm.

The wage might sound high, because it includes salary, bonuses, income from stock options, severance pay, cash value of meals, tips and certain other types of compensation.

San Mateo County had the nation’s highest average tech company wage last year, $240,663. That was actually down 23 percent from 2013, when the county’s average was probably distorted by a $3.3 billion stock option gain reaped by Facebook CEO Mark Zuckerberg. It was also skewed in 2012, when the Menlo Park company went public and Zuckerberg made a $2.1 billion profit exercising options, said JLL Vice President Amber Schiada.

“It’s crazy how just one company can move the needle, but San Mateo’s tech-job base is small” compared with neighboring counties, Schiada said. Last year, with no Zuckerberg options in the picture, San Mateo County’s average tech wage looked a little more like its neighbors’.