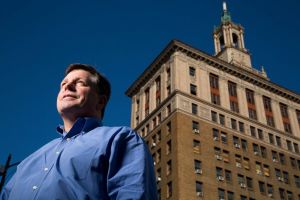 SAN JOSE — There’s Google, and there’s Gary. Everyone knows Google, the internet giant that has spent more than $300 million buying up property on the edge of downtown San Jose to build a colossal campus.

But Gary? By the end of June, he, too, will have spent about $300 million on properties downtown — scooping up 21 separate parcels in two years — including the historic-but-neglected Bank of Italy building that he has been lighting up to celebrate the Sharks’ run in the National Hockey League playoffs. He and his partners, including real estate investor Jeff Arrillaga, have assembled such a large collection of properties and in such a pattern — essentially running down the spine of San Jose’s downtown core — that he’s considering building a private power plant to serve them.