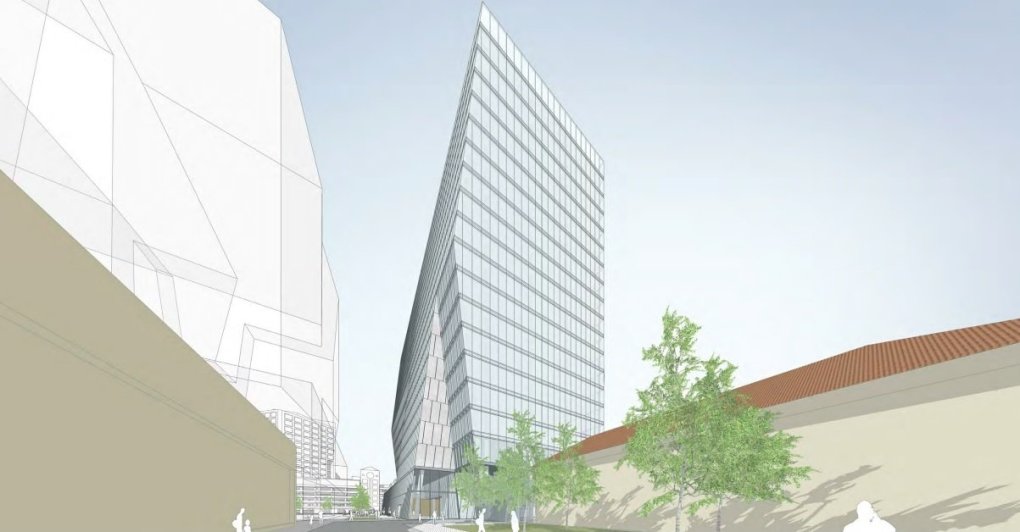 SAN JOSE- Two major downtown San Jose projects, a new office and retail tower next to The Tech and the renovation and revamp of the Bank of Italy historic high rise, are moving forward with construction efforts through a venture of a global real estate titan and a local developer.

Vancouver based mega-developer Westbank and busy South Bay developer Gary Dillabough have teamed up on an array of downtown San Jose endeavors, and the joint effort is poised to bear fruit with separate projects to renovate the Bank of Italy tower and to replace Parkside Hall through a development called Park Habitat.

“The Bank of Italy will anchor the Historic District and is kitty-corner from the future BART station on Santa Clara Street,” said Scott Knies, executive director of the San Jose Downtown Association. “Park Habitat would complete the re-imagining of the entire Park Avenue corridor.”

Construction is slated to start this month on an office tower at 180 Park Ave. that once was known as Museum Place and is now being called Park Habitat, according to sources familiar with the development plans of Westbank and Dillabough.

The Parkside Habitat project is expected to total 1 million square feet, which includes 900,000 square feet of office space, along with ground-floor retail, and an expansion of The Tech, which is adjacent, the sources said.

The first stage of construction for Parkside Habitat will focus on moving utilities, soon to be followed by the excavation of a vast hole to accommodate the foundation and the tower. The existing Parkside Hall will be bulldozed to clear the way for the project.

With the Park Habitat tower in the works, the stage is set for a dramatic revamp and invigoration for one of the key stretches of downtown San Jose.

Park Avenue is a crucial street because it points toward the Fairmont Hotel, San Jose State University, and Cesar Chavez Plaza on the east, serves the theater and museum districts in the area of Almaden Boulevard, and points to Google’s game-changing Downtown West proposed development to the west.

Besides Park Habitat, two other crucial projects are in the works along Park Avenue, either next door or across the street: Jay Paul Co. is constructing what’s expected to be an iconic office tower at 200 Park Ave. and also intends to begin demolition this year of CityView Plaza as the first construction stage to build a three-tower tech campus.

Westbank and Dillabough have formed a joint venture that could lead to the development or revamp of office, retail, housing, and entertainment projects.

“We are getting in gear again and moving ahead,” Dillabough said Wednesday. “We are going to restore the Bank of Italy to its original beauty.” The bank is undergoing wide ranging interior and exterior upgrades, renovations, and improvements.

“Downtown is very fortunate to have Gary Dillabough and his partners invest so heavily into San Jose,” said Mark Ritchie, president of Ritchie Commercial, a real estate firm. “These are very daunting projects in any market, especially a highly specialized but totally worthy historic rehab like the Bank of Italy tower.”

Dillabough’s deal to bring Westbank on board for numerous downtown San Jose projects is already producing dividends and will yield further rewards over time.

“Westbank cares deeply about all of their projects,” Dillabough said. “Westbank is making all the difference in the world for what we are doing in downtown San Jose.”

The alliance with Westbank will bolster the Dillabough efforts on multiple projects.

“We are not slowing down,” Dillabough said